Zaya is the 60th character in the Foot series. He is part of the team Brazus from Brazil.

It uses it's tail to juggle with the ball and cheer the crowd. 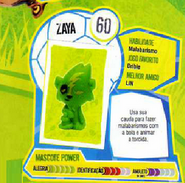 Unpainted Red
Add a photo to this gallery

Retrieved from "https://crazybonespedia.fandom.com/wiki/Zaya?oldid=91658"
Community content is available under CC-BY-SA unless otherwise noted.