Start a Wiki
Two exclusive figures were given away at Zany Brainy stores in the mid - 90's. The stores, a subsidiary of FAO Schwartz, opened in 1995, but were forced to close in 2001 due to foreclosure and bankruptcy (see Wikipedia). They had Crazy Bones T-Shirts and 2 Exclusive Figures, Zany and Brainy . As a result, these figures were distributed on a very limited basis, and are quite rare.

These figures were given out at the release date of Crazy Bones, in 1996, but were also available in a tin that along with the two Zany and Brainy figures, it also came with a Golden bone , a Game Sheet, and a Tattoo Sheet. On the packaging they are referred to as Zany-ack and Brainy-ack. The tin cost 5.00$ and was very limited. There were also a two limited edition soccer themed Gogo's that were available at the store for a short period of time. There is additional three figures that are the rarest of them all which brings this series total to seven. 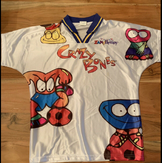 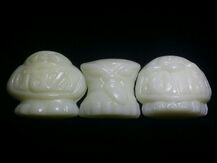 Rarer figures
Add a photo to this gallery

Retrieved from "https://crazybonespedia.fandom.com/wiki/Zany_Brainy?oldid=102074"
Community content is available under CC-BY-SA unless otherwise noted.