Start a Wiki
Q Mack and J Box are two people who helped out in the Trick Shot Contest. Q Mack is very well known for his basketball trick shots, and his partner J Box is well known for his beatboxing. The two visited schools across America and gave out special limited edition Q Mack and J Box Gogo's (pictured). These two Gogo's are super rare, and are the only celebrity Gogo's that are avalible to the public. They can also be won in contests (the Gogo's that is).

J Box and Q Mack
Add a photo to this gallery 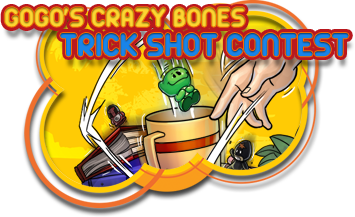 The Gogo's Trick Shot contest is a contest by JDNA.

There are two grand prizes to be awarded, one for best real trick shot and the other for best fake/edited trick shot.

Retrieved from "https://crazybonespedia.fandom.com/wiki/Trick_Shot?oldid=104010"
Community content is available under CC-BY-SA unless otherwise noted.