Crazy Bones Trading Cards was a Series of Trading Cards of Characters from Gogo's (1996). They were promoted by Keebler, so it's assumed they might of came with Keebler Cookies.

In July, 1999, 5 exclusive baseball themed Crazy Bone figures were given away to the first 10,000 children, age 14 and under at a Toronto Blue Jays baseball game in Toronto, Canada. The only days the figures were given out were July 3rd, 17th, 31st to August 14th and 28th. The figures are extremely rare. Also given away were figures from the Mexican Hielocos Futboleros series and a baseball card!

The cards had a picture of either BJ, Grand Slam, Fletch, Captain K or Screwball.

Below is 4 of 5 of the cards. (some photos are bad quality because these items are hard to come by)

Screwball card
Add a photo to this gallery
These are cards with a picture of the Monster Bones faces on the front. These cards were given away at McDonald's restaurants in 1999, along with a pack containing two mega Crazy Bones.
Sunblest Alien Trading Cards that were given away in the 90's in Australia with Sunblest breakfast cereal. The cards featured Alien style characters but they were not from the series. It is unknown if there were only cards and not figures also released. 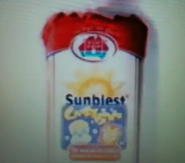 Sunblest package
Add a photo to this gallery

On January 21, 2011, Magic Box International added a new Gogo's Crazy Bones Trading Card Game. This new trading game complements the range of Gogo collectible figurines and creates an exciting new way to play and collect Gogos. There are 160 cards to collect, including 32 special prismatic 'Leader' cards. Packets of the Gogo's Crazy Bones Trading Card Game contain 6 cards, including 1 special card and are priced at 50p. A Starter Pack is also available containing a Collector Album for storing the cards, a full game guide, checklist and 3 packets of cards. The Starter Pack is priced at £3.99. 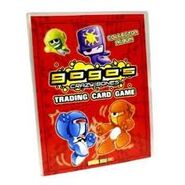 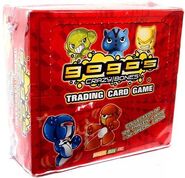 Inside cover and common cards (from the Grannelle collection)

Leader cards (from the Grannelle collection)

Instructions, 1 (from the Grannelle collection)

Instructions, 2 (from the Grannelle collection)

Poster (from the Grannelle collection)
Add a photo to this gallery

Foot cards
Add a photo to this gallery
Jo-Kei-Go was a Trading Card Game for Gogo's Crazy Bones, released alongside Megatrip. It was released in Brazil, 2009.

It is assumed, that there is a card for every figure in the Panini Megatrip Series. Each pack came with two cards and two gogos, similar to Power.

There are three different types of cards, with an elemental type of theme. They are Water, Wind, and Comet.

Back of a Jo-Kei-Go Card
Add a photo to this gallery
These were special Power Trading Cards which has different points and a game that can be played with them. Some of these cards had a holographic finish to them and they were released a supplements in each Power package. 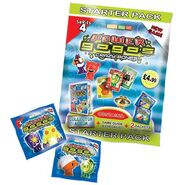 A game instructions
Add a photo to this gallery

The popular Top Trumps franchise had created a promotion for Gogo's Crazy Bones in 2008. It featured 30 of the popular Gogo's Crazy Bones characters, including some of the special Evolution series. The pack gave information wn on the rarest, bounciest, quickest and most wanted Bones in the series. It also included rules for the Gogo’s Games, plus a history of the Gogo’s, and even some gaming tips from Gogo’s Champions.

In Brazil there was another Top Trumps series which was based on the Monica's Gang Gogo's.

Add a photo to this gallery
Retrieved from "https://crazybonespedia.fandom.com/wiki/Trading_Cards?oldid=96300"
Community content is available under CC-BY-SA unless otherwise noted.