Start a Wiki
Toonz Micro Monsters are similar to Crazy Bones. However, they have lenticular faces. (motion stickers for faces) There are 40 characters to collect. There are also 2 rare Toonz that have been combined to make one larger Toonz figure. They are made by Dracco (Creator of Dracco Heads ). There is also a series 2 known as Toonz X-Ray.

Sealed box
Add a photo to this gallery

Toonz were made available in Argentina under the name, "Makakos Shikai Dynasty!" The collection comprises of the same Toonz from the first series, but with different colors and hologram faces. In Argentina, Toonz are distributed by Global Distributors Inc. The series was released in the early 2010s and saw a re-issue in 2019. 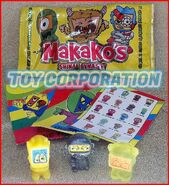 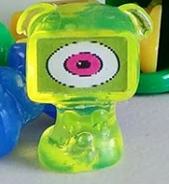 Add a photo to this gallery
A second series of Toonz, also made by Dracco. (Creators of Dracco Heads.). They were also released by Topps. This series includes 40 more characters plus four characters that can be combined to create "Mega Toon" (44 Total).

The figures now have the lenticular parts on places others than their heads, like on their stomach, or the whole body itself. Every pack includes 3 Toonz, 3 Stickers, and 1 Checklist.

There was a Tosty snack food promotion in South America, where these Toonz were given away in each pack and there was a tie in board game. It is interesting to note that Tosty also did an official Gogo's Crazy Bones Fut promotion as well.

Tosty promotion
Add a photo to this gallery

Toonz Battle Planet is a Toonz playset that looks like the moon full of craters. It is known as the Battle Planet.

These are containers to keep the Toonz figures inside.

The Belt Clip is a container with a clip that can be attached to the collector's belt and it can store many Toonz figures inside.

A small bag to carry the Toonz figures in. It can be attached to a belt.

A watch with Toonz pictures on the front. It can eject a figure out of it. 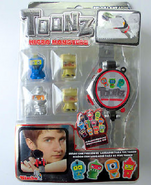 South African variant
Add a photo to this gallery
A plastic ramp to flick the Toonz figures across.

A plastic hoop that is suppose to look like it's on fire. It is sold in special boxes of Toonz X-Ray.

A catapult to launch your Toonz figures flying in the air.
Retrieved from "https://crazybonespedia.fandom.com/wiki/Toonz_(Blinku)?oldid=105916"
Community content is available under CC-BY-SA unless otherwise noted.