Start a Wiki
Los Terribles YuYus is a series of unofficial Gogo's that were released in Spain in the mid to late 90's. These figures were given away as supplements to 'Phoskitos' chocolate cakes for children's school lunchboxes and 'Dunkin Chewing gum' (similarly to the Polish Dunkin Shockys series). The company that released them was known as 'LEAF', which is a popular bubblegum company. Each figure has a design of a monster. They appear to come in 5 colors (pink, green, yellow, magenta and blue). 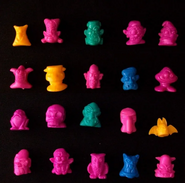 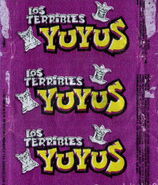 Size Comparison to Mosh and Eggy

Sticker Album Credit: Horn666
Add a photo to this gallery

Retrieved from "https://crazybonespedia.fandom.com/wiki/The_Terrible_YuYus?oldid=102039"
Community content is available under CC-BY-SA unless otherwise noted.