"You can load, you can do it or you can just make do."

A girl that has one hand on her hip and long curly hair that is covering one eye.

Tez has an alternate name, this name is Tipy

A mask for Tez was made exclusively for advertisements.

A Tez was made exclusivity as a plush in the Netherlands in her Pink Color, other Groovy characters have been made into plushies .

Mega: A mega version of Tez was sold at the C1000 stores in the Netherlands. It was sold alongside Blinq (Mega).

Metallic: A metallic version of Tez was released in Redish pink.

All colours of Tez 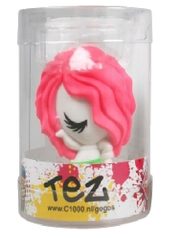 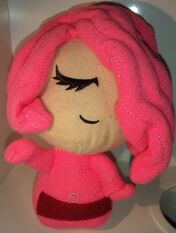 Plush
Add a photo to this gallery
Retrieved from "https://crazybonespedia.fandom.com/wiki/Tez?oldid=95756"
Community content is available under CC-BY-SA unless otherwise noted.