Supergoal was released in Israel in 2010. Every year Israel releases Supergoal figures dedicated to the Israeli soccer team commemorative (simillar to the England 2010 Series). The first series is identified by "Supergol 2010" in English on the back (neck) of the figures. This is replaced with PPI Worldwide in the 2011 series. All names are in Hebrew.

Rarities in the series are gold figures (see photo example below). There are four teams in the series. The teams are Beitar Jerusalem F.C., Maccabi Haifa F.C., Hapoel Tel Aviv F.C., and Maccabi Tel Aviv F.C. Crest figures for each team have been released (base color in 2010, gold metal c/s/f in 2011), and are also quite rare  They were issued as part of the commemorative tin collections for each year. 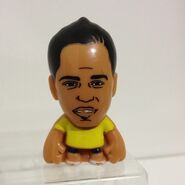 Add a photo to this gallery
Another series has also been released and is related to Supergoal called FCBarcelona (FCB). (Football Club Barcelona) FCB was released in 2012. The 2012-13 Supergoal began on August. 25, 2012, and ended on May. 20, 2013. Maccabi Tel Aviv won the Supergoal for 2012-13. FCBarcelona figures are printed with the letters, "FCB", and are in English, again with character names in Hebrew.

This is a series of soccer players from Barcelona, Spain. It released in Israel in 2012. It is exclusive to Israel and can be found on eBay for a decent price.

(from the Grannelle collection)
Add a photo to this gallery
Retrieved from "https://crazybonespedia.fandom.com/wiki/Supergoal?oldid=105974"
Community content is available under CC-BY-SA unless otherwise noted.