1/29
Add photo
A hallmark of Gogo's Crazy Bones, and earlier Crazy Bones as well, are the stickers and cards. In Series 1, 2, 3, and 5, flow packs and others come with stickers. In Series 4, collector cards (which can be used in gaming) replaced stickers. In the first 3 series, 3 stickers are issued along with 3 Gogo's. In Series 1, rare stickers are issued for the Wanted and Most Wanted figures. Various identifying marks are incorporated on these particular stickers, e.g. black patterned background and a gold star on a black field on Most Wanted stickers, and a blue background with a white star on a blue field for the Wanted sticker. Wanted and Most Wanted stickers were avalible in a holographic form as well. Series 3 offered two different types: 3 regular, and sheets of 4. 2 Series 4 collector cards are included with 2 figures in regular flow packs, with two types available - those associated with the common figures (80), and 10 special foil cards for the Most Wanted figures in the series. These are rarities. Sets before 2007 came with 4 stickers displaying character artwork on a white sheet with no background.

Classic (red) Miro-K, J-Box, Q-Mack, super gogo, Mr. Peako, and yellow Miro-K were issued with ownership certificates in lieu of stickers; in the case of the classic Miro-K, each certificate bears the issue number, read as XXXX/5000, designating each as an individually numbered figure.

These classic stickers would come in each bling bag package. These stickers were either on a row of three, four or solo. 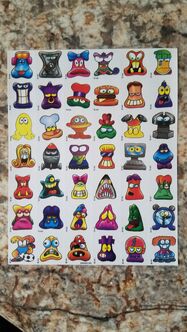 Giant stickers
Add a photo to this gallery

These modern stickers would come in each bling bag package. These stickers were either on a row of three, four or solo.

The S-series sticker collection - a highly limited release of the Series 1 Most Wanted stickers, distinguished by the letter "S" next to the identifying figure number in the lower right-hand corner. When sales of Series 1 began in 2009, the intended stickers (with the gold star) were still in print production - these "S" stickers were only intended to be included for a short time, and within a couple of weeks, packaging of the "gold star" stickers was well underway. That is why these are in very limited supply, and as a result disappear quickly once offered by vendors to the marketplace. The by-product of a quick-fix only intended as a "get it out there" solution for the missing product problem; conceivably, not much thought was likely ever given to the eventual unique collectability of these extreme rarities.

The result has been a high price tag, with stickers typically selling for as much as $8.50 USD (at the time of this writing) each at the retail level, although scarcity escalates with every passing day - there will eventually come a time when no more are available. It remains to be seen at this juncture how much more fervently collectors will react, and just what price-point these ill-considered, curious anomalies will ultimately demand on the aftermarket.

Game Cards are small cards that come in each blind bag package and have advertisements, checklists, character profiles or most commonly a gaming instructions and score sheets.

These are temporary tattoos based on various classic Gogo's Crazy Bones characters. These were released by a company known as Visions in 1999. Also the Zainy Brainy Tin came with temporary Tattoos of Zainy and Brainy.

Image of the back of a tattoo set
Add a photo to this gallery
Retrieved from "https://crazybonespedia.fandom.com/wiki/Stickers_%26_Cards?oldid=107556"
Community content is available under CC-BY-SA unless otherwise noted.