Start a Wiki
The Rockeros series was a Crazy Bones production run limited to only a few thousand packs, and were never released/available in the U.S. It is a very rare series which featured 60 characters to collect.

There are only a few thousand, if not hundred of these available in the whole world. [citation needed] Like the Cool series, all characters are based on music. As far as can be determined, they were based on rock stars popular at the time of manufacture.

The Rockeros were released in Brazil under a promotion with Coca-Cola. 40 of the 60 Rockeros saw a release in Canada with the Crazy Bones Board Game. Since Crazy Bones were not very popular in those countries when the series arrived, these were only out for a few months. [citation needed].

They were released in Brazil with Coca-Cola as Geloucos Rockeiros. They could only be obtained by collecting special bottle caps. It was missing 3 figures from the set (one being a reprint). They were also released with a promotion by Topps Bazooka Bubblegum, but these figurines were solid colors instead of transparent and had a 'Bazooka' logo on the back.

All Rockers that come with the game - Part 1

All Rockers that come with the game - Part 2 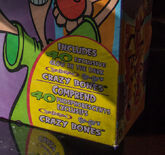 Brazil Packs
Add a photo to this gallery

Retrieved from "https://crazybonespedia.fandom.com/wiki/Rockeros?oldid=94769"
Community content is available under CC-BY-SA unless otherwise noted.