Start a Wiki
Mr. Peako is a super rare Gogo. Only a few of these were ever made, even less than the Holy Grail of North American Gogo's collecting, Miro-K. He could only be obtained by winning contests on the Crazy Bones website and Facebook page.

As Miro-K is intended to be an ultra-rare representative of Series 1, Mr. Peako is the ultra rare Gogo made for Evolution as marked on his card, which has a place for numbering (the same as classic Miro-K), but is left blank.

Similar to how Miro-K used a sculpt from a another series, Mr. Peako uses the same sculpt as Horo from Power. Mr. Peako is also known as the "Principal Gogo". 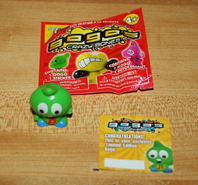 Mr. Peako, unwrapped - his authenticity certificate clearly states he is an Evolution Gogo (Series 2), yet he is packaged in a Series 1 single-pack (from the Grannelle collection). 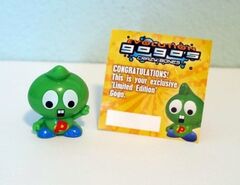 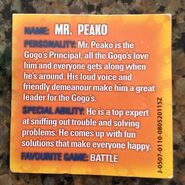 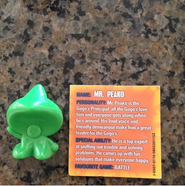 Back of Figure
Add a photo to this gallery
Retrieved from "https://crazybonespedia.fandom.com/wiki/Mr._Peako?oldid=100026"
Community content is available under CC-BY-SA unless otherwise noted.