Megatrip is a series that was released in August 2009, and like many of the modern series there are a total of 80 characters to collect. The series was the second for countries that didn't Receive Evolution.

The standard release refers to the Panini release. This release included all 80 characters in their original variants.

Megatrip was released in Asian countries, beginning with the Philippines, in 2012, and reissued in 2017. The series was distributed by Ban Kee Trading Inc. The series included all 80 characters in painted, glitter and laser variants. 10 Metallic figures were released in a special edition tin.

An updated version of the Panini Megatrip series was released in Turkey in 2013. This series had glitter and glow in the dark variants omitted. The colors for the unpainted figures were different from those in the standard release. Multi-color and metallic figures could also be found in packs.

The Turkey release also saw a release in Indonesia sometime in the 2010's, but under the distributor EMCO Toys, rather than Panini.

In the late 2010's, the Turkish version of Megatrip was released in Mexico. However, it is unknown if these figures saw wide distribution, as no album or packs have surfaced online. The only evidence of Megatrip's Mexico release is a coloring book, which included two gogo's when bought new.

Released in 2008, this series saw the first release of Megatrip, under a promotion with Danone. Alongside the Dino figures, were variants characters 60-80, made exclusively for this series. The printed "D" is what sets these apart from the normal figures.

The Nuclos Tins, released in promotion with Kalise, included the only European release of characters 40-60.

Edge is a variant of the Megatrip series that was released in the United Kingdom in early 2012. In this series, the Gogo's return to their previous solid looks from the first series.

There are only 60 characters instead of 80 for this series, and there are no cards or stickers were available. The characters reuse the moulds from their Megatrip counterparts, and the only difference is the color schemes of the Gogo's, and in some cases, certain Gogo's had their mould slightly tweaked.

Changes from Edge to Megatrip

Metallic figures
Add a photo to this gallery

The First 40 characters of Megatrip/Edge were made into a promotional series. They were only avalible in Europe at Carrefour, Real and C1000 supermarkets.

Each packet had one Gogo and one sticker in it, regardless of what supermarket you were in.

Released in the late 2000's to early 2010's, this series was released in three different supermarkets across Europe. In the Netherlands, these were released under C1000 in 2009. In the early 2010's, Carrefour released these figures in Belgium and France, respectively. Supermarket, Real, ran a promotion in Poland. Each store had an exclusive gold figure. C1000 had a golden Tsu, Carrefour had a golden Tau, and Real had a golden Ayu. This series is called "special edition," for being a simplified version of the series that was only released via supermarkets promos. Only the first 40 figures were released in this series.

The first promotions, in the Netherlands and Blegium, had a smaller budget compared to latter promotions. Figures 1-20 had no Glitter variants, but figures 21-40 did. However, the detailing of figures 21-40 were drastically simplified as a result. Figures 21-40 had either tan or white detailing in just one spot. This meant figures like Juruk lacked extra details like the icon on his chest.

Golden TSU with Certificate
Add a photo to this gallery

Sütaş Taltlimmm Gogo's are the Megatrip Gogo's from Series Dino Gogo's, but with different styles. This series is very similar to Dino Gogo's, as they both feature the same characters, with company logos, and different designs from their Megatrip counterpart. Though, different from the Danone Series, these support an "S" for the Sütaş Logo, and the some of the S's is placed in different spots then the D's were in Series Dino Gogo's. This Series also features gold figures, instead of dinos. In a similar promotion to the Danone series, this release of Megatrip saw variants of characters 60-80, made exclusively for this series. The printed "S" is what sets these apart from the normal figures.

Package
Add a photo to this gallery

Mega Bones based on characters from the Megatrip series. Some Characters from Megatrip (Special Edition) were made into a larger size. These were only available at Carrefour Supermarkets. All comes in 5 colors.

Advert
Add a photo to this gallery

The Mega Gogo's Megatrip were released around 2009-2010 as toasts at the restaurant Giraffas.

They could come in the normal, glitter and glow in the dark versions. Each pack came with 1 Mega figure, a checklist and a single special card to play. The Mega Gogo's have the PPI Worldwide stamp on their backs.

There was another series of Megatrip (Mega) released by Carrefour, but these were not as large and were painted. 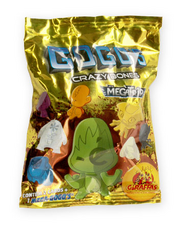 Megatrip Limited Series was a special tin that was released exclusively in the Philippines in late 2012.

It includes 10 Megatrip Gogo's with a special metallic finish. 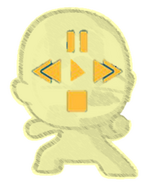 The Golden Play with Gus' Mold 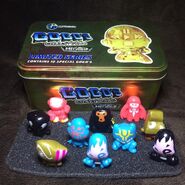 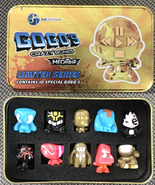 A release of Megatrip figures in promotion with Tosty in Costa Rica. These figures were available in specially marked bags of Tosty brand chips under the name "Fuerza Gogo's."

It is unknown how many of the 80 characters were in this series, or if there were any new characters, as was the case in the Foot series. The only evidence of this series' evidence is a commercial.

Fuerza Gogo's Commercial-0
Commercial
Add a photo to this gallery

Retrieved from "https://crazybonespedia.fandom.com/wiki/Megatrip?oldid=98171"
Community content is available under CC-BY-SA unless otherwise noted.