Start a Wiki
Little Tokyo's (otherwise known as Little Jap's) were once Asian toys. However due to how they were made it caused pollution so they were taken off the market. It looked gloomy for these cute little characters, it felt like they would never see the light of day. Then a toy company known as Exit-Toys of Barcelona and Salo of South America picked up the molds and turned these characters into collectible fun figures.

There is 36 cute characters in total, which come in 2 different colors also some characters can come out in clear colors, but only in the special edition green metal boxes.

In 2019 they were re-released in Mexico, in surprise eggs. There were 33 characters in this release. 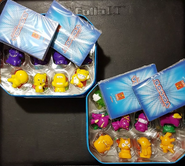 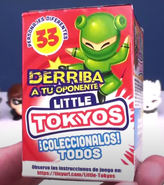 Retrieved from "https://crazybonespedia.fandom.com/wiki/Little_Tokyo%27s?oldid=104191"
Community content is available under CC-BY-SA unless otherwise noted.