Lightning is faster than the speed of light! Recognized worldwide as the fastest in the world, No one can beat him.

Usain (Lightning) Bolt in real life at the Olympic games. 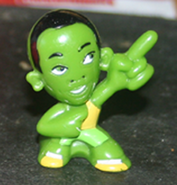 Lightning (from the Grannelle collection).

3 variations of lightning from Israel, but the number on the back is 60
Add a photo to this gallery
Retrieved from "https://crazybonespedia.fandom.com/wiki/Lightning?oldid=95567"
Community content is available under CC-BY-SA unless otherwise noted.