Start a Wiki
These are various rubber keychains which were made with various classic Gogo's designs on them. They are similar to the magnets. 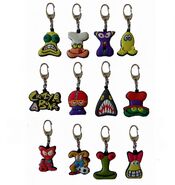 Add a photo to this gallery
These are officially licensed Crazy Bones charms that were available in 1999. Charms were of characters from the Original and Sports series. These are similar to the regular keyrings but are made out of metal instead or rubber. 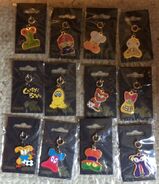 Add a photo to this gallery
These are various rubber keychains which were made with various modern Gogo's designs on them.
These are keychains that could only be purchased in Holland and at the C1000 store.

A rubber Foot series keychain that is in the shape of a soccer shirt. This keychain also doubles as a coin purse. It was released with C1000 stores in Holland.

A silk lanyard that is used to carry a key around the wearer's neck. It is decorated in Groovy art work.

Pouch on the back of the keyring

Groovy Lanyard
Add a photo to this gallery
Retrieved from "https://crazybonespedia.fandom.com/wiki/Keyrings?oldid=84945"
Community content is available under CC-BY-SA unless otherwise noted.