Unlike Crazy Bones, Bouncin' Boneheads were packaged so that largely, what was contained within each packet was on display in plastic bubbles. The packaging had several different changes made to it throughout the production period of Bouncin' Boneheads, and some of these variations are listed below.

A card with 7 individual bubbles, with all 9 Boneheads on display. Frequently, these packets would have purple stickers placed over text on the card, which read 'includes stickers' presumably as these stickers were not largely produced, though some do exist.

Another packaging variation had two or more boneheads hidden by a card placed inside the plastic bubble.

A third packaging variant included the typical backing card and some bubbles, but also included a 'Caddy' in which to store the Boneheads. This also contained some 'hidden' bones and is rare. Later on, new characters were added, and the checklists were updated. These characters were packaged in either one of the variant packages described above.

Jojo's Bouncin Boneheads released limited edition shiny metallic and painted face Jojos. Unlike Crazy Bones, these were not randomly put in regular packs, instead were sold in special packs guaranteeing you got them.

To help promote JoJo's Bouncin Boneheads figures in Germany and Finland, a candy company known as 'Chupa Chups' gave away some of these figures.

It is assumed that it worked the same way it did in Finland. 'Chupa Chups' would give away special codes that you could save up with each purchase and send away for a free JoJo figure.

The 'Caddy' in Pink. Several colours were available.

Metal Jojo's. (From The Gir Collection.)

Glitter Jojo's. (From The Gir Collection.)

In the beginning... A long time ago, in fact 11,600 years ago, there was an eighth continent called Atlantis; the inhabitants were some of the most creative and talented people on earth. Some very smart people say Atlantis never existed, but with a little imagination and some hints from Jojo, we know it really did.

Right at the end of the Pleistocene (pronounced Play-toe-seen) Ice Age there was a giant earthquake that sunk Atlantis into the ocean. After thousands of years of cooling off and land mass re-formations, the only thing left at the top of the highest mountain peaks were millions of chunks of really cool pieces of volcanic rock. One day, a boy named Jojo stumbled upon these treasures and showed them to his friends. Soon the word spread and children everywhere became fascinated by the bright colors and sparkling crystals that were shaped like bones. Jojo, who was also very smart, began to paint faces on some of these "bones" and suddenly the "bones" became Boneheads.

Children loved their boneheads and started to collect, trade and play games with these wacky, bouncin' bones. They even named one of them Jojo and the legend grows even now. Today you can collect all 36 of the Original Jojo's *(Sorry they're no longer made out of volcanic rock). You can try your skill, match them with your friends or just keep 'em safe. There's just one thing, insist on Original Jojo's because only Original Jojo's trace their history all the way back to the magical lost continent of Atlantis.

There is much rarer versions with the words 'TF1' on their body, these ones were released by Panini. 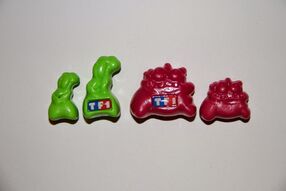 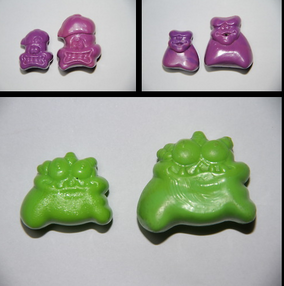 credit: http://original.jojos.1996.over-blog.com/pr%C3%A9sentation-des-jojo-s.html
Add a photo to this gallery

12 new characters that were sold along with JoJo's Bouncin Boneheads. The characters were hard to find and were only sold in special boxes.

Add a photo to this gallery
Tim'Foot is a Series of JoJo's Bouncin Boneheads (by Imperial Toys) for released in France and sparsely in the UK. These JoJo's were released for The 2002 Fifa World Cup. The characters are soccer themed. There are 12 characters in total, 11 of which are football shirt-shaped (numbered on the back 1-11) and one of which is a football.

Package (Containing 3 figures)
Add a photo to this gallery

These were Jojo's figures that were given away free with packets of 'Krema Candy', It is not known how many different figures came with this ad, only one has been found. 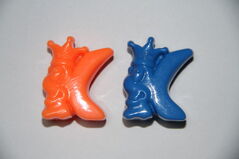 Orange and blue (Credit: http://mr-capdel.tumblr.com/)
Add a photo to this gallery
Mysterious JoJo's Bouncin Boneheads are as the unofficial name suggests somewhat of a mystery. They are stamped "Laor Toys" on the back like original JoJo's. They are extremely uncommon and are numbered from 1 to unknown #52 being the highest number found yet. So they are not a true series 3. Some people have speculated that they are South African exclusives, however after the discovery of Mystery JoJo's #52 which has sidecurls and what apears to be a kippah it is also a possibility that these are Israeli exclusives JoJo's are afterall Israeli.

Since a checklist or other information has yet to show up. These are temporary names or rather descriptions for what Mystery JoJo's are known so far:

A bouncy ball with a picture of Jojo on it, used to play 'Bones Jax N' Ball' with JoJo's Bouncin Boneheads.

Ball
Add a photo to this gallery
These are containers to keep the Jojo's inside of.

The Caddy is a plastic tube container that can carry a lot of Jojo's. The Caddy has a clip to be able to place it on the collector's belt. The Caddy came in many florescent colors.

In France there was a similar container but it was released with a promotion with Chupa Chups candy. 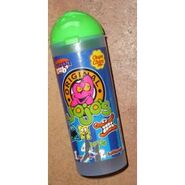 Chupa tube
Add a photo to this gallery

The Bounce Deck is a plastic board that is use to bounce the Jojo's onto. 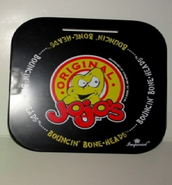 Arguydal Jojo's are hand painted porcelain models of some of the JoJo's Bouncin Boneheads characters.

A music album released in 1996 based on the JoJo's series.

A plastic trash can that came in many different colors, you place a figure inside and then press a button which ejects the figure into the air.

Various stickers that are sold along with JoJo's. These stickers come in all different shapes and styles and are based on the JoJo's characters.

A grid of stickers from the mystery packs. 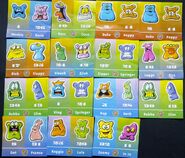 French stickers
Add a photo to this gallery
Retrieved from "https://crazybonespedia.fandom.com/wiki/JoJo%27s?oldid=99462"
Community content is available under CC-BY-SA unless otherwise noted.