Gold Tin Part 2
Add a photo to this gallery
The Gold Tin Part 1 featured Gogo's from the first 3 series. The figures were finished in gold metallic. The tin was heavily hyped, but sales were lackluster in the U.S.

The Gold Tin Part 2 is the second tin in the Gold series. It's a continuation of the use of figures from the regular series, again featuring figures with a gold metallic finish. The Gold Tin Part 2 was unavailable through North American distributor, JDNA - shown is a European import. It was the rarer of the 2 tins.

inside the Gold Tin Part 2 Booklet

inside the Gold Tin Part 2 Booklet 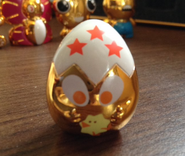 Up close of Wanted Frug

Tins from around the world are of interest to collectors. Some are difficult to find, while others may be only available as limited editions or promotional/commemorative items. Typically they will include Gogos not featured in other series, making them unique. In Asia, there are no Series 2 or 3 Gogos in The Gold Tin, there are only Urban Toy Gogos in the Gold Tin. Sato is missing from this tin.

These Gogo's are also a different shade of gold to the regular tins, they are a lot brighter and the original tins had the gold color a lot more faded. 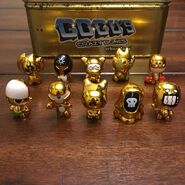 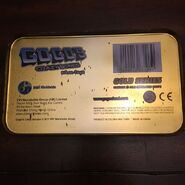 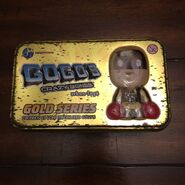 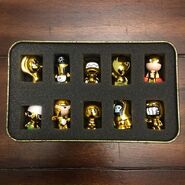 Add a photo to this gallery
Retrieved from "https://crazybonespedia.fandom.com/wiki/Gold_Series?oldid=94394"
Community content is available under CC-BY-SA unless otherwise noted.