View source
Gogo Hits is a German music CD based on the Gogo's Crazy Bones series. It was released in 2000. 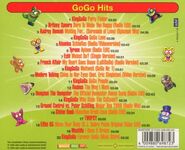 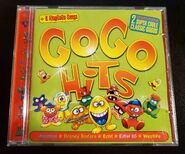 Inside case including disc art

In Holland during August 2011, C1000 worked alongside Talpa Music and PPI Worldwide to created a new promotional campaign for the Groovy Gogo's series. Talpa and C1000 chose 6 of the 80 characters in the set and used them as the main characters for the set's advertisements. In promotional material, the 6 chosen characters (Tez, Bee, Zipp, Blinq, Flow, and Hip) formed a band named “The Breakz”.

Talpa then created a catchy song and music video produced in Miami with professional performers and named the video as “The Breakz - Let's Go”. A month prior to the launch of the promotion, “The Breakz” music clip was launched in Holland via YouTube and a famous Dutch blogger causing a “National Hype” prior to the launch of the Groovy Gogo’s Promotion.

A second song, titled "One Step At A Time" was also produced and sold alongside "Let's Go" on a CD in C1000 stores. 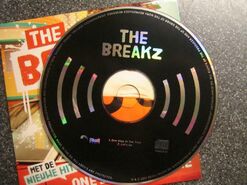 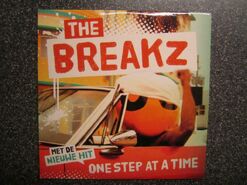 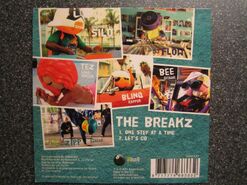 A Tez & Blinq figure sold in a box with headphones that resemble them. C1000 stores only. 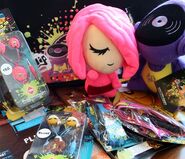 The Crazy Bones Rap Song is the Theme Song for Crazy Bones back in the 1990's. It was on thier website, and Singing Plushes were made for this song. The song was supposed to be written and performed by Rapper.

"You got your Bones Ready? A Group of Bones too?"

"Play with Crazy Bones, that's what you got to do!"

"Get your Stickers, Get your Target. Play for Fun, Play for Keeps."

"Just play those Crazy Bones on the Playground and The Streets!"

"Play with Crazy Bones and you'll never be Alone!"

"That's What you gotta do, you got to Play With Crazy Bones!"

"You got to Play The Craze!" 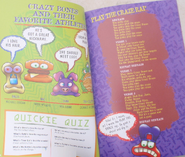 Rapper is the one who created this song 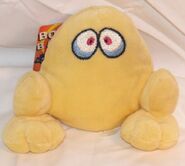 I Want To Be Your Gogo! is a song that was made in for The Megatrip (Special Edition) Commercial(s) in 2009/2010. It was used at the end of Carrefour Commercials, and an Instrumental Version was used in the "Introducing Gogo's at Carrefour Supermarkets" Commercial.

"Wake Me Up, Wake Me Up, I want to be your Gogo!" "We're Moving constantly, seeing you walking past, let me remind you, we are here, waiting just for you!"

"Let's do it, Join With Us! All of Us, Upside Down, and Why don't you join us? In This Game we have made for you!"

"Hold still, look at me, I can see, you are smiling. let me remind you, we are here, waiting just for you!"

Instruments Play, then he says "Come and Play!"

Another Singer takes other.

"I'm all cool with My Gogo Brothers. Crowd is within, Picked up my Ride. Mash Up, Fooling Around, Moving About, Swinging the hips with The Gogo Chicks. I can really dig it, I'm a Cool Looking Figure, I was blessed to sing, making people swing. Now I really get to choose, the Gang with the. There's Need for Others, Just Me and My Brothers."

A Chorus of Ohs, are heard.

He says "Come and Play, Yeah!", as the Chorus Continues, as the Background Music.

He ends the song, with one last "Woahahoah!".

The Song Ends with Instruments playing.
Community content is available under CC-BY-SA unless otherwise noted.
Advertisement