Start a Wiki
Crazy Bones Bon Bons were pressed candy that had original Gogo's artwork on them. They were released for a limited time in Canada in the late 90s and were a collaboration between CeDe (makers of Smarties) and ToyCraze inc.
Crazy Pops were bubblegum candy lollipops that came with Sports 2 Gogo's rub on tattoos that were sold in America in the late 90's.
SweetBox bubblegum sold in the late 90's and early 2000's in Europe to help promote the Aliens and Skinny Bombers series.

Buzzy Gum is a Brazilian Candy Company. Not Much is known about this Company. They release Stickers with some of their Gum.

In 2010, the gave away Fut Gogo's and Fut Gogo's Stickers with their Gum. 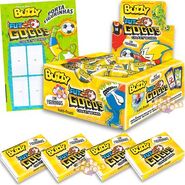 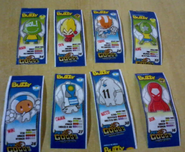 The Brink & Drink is a grape-flavored beverage enriched with iron. The product, which launched the Gogo's Monica's Gang series in its last edition, brings in 90 Fut Gogo's characters divided into nine teams of ten Gogo's each. The series brings rare figures with metallic silver gold and bronze finishes. The gifts also come in color-changing Energy and hand-painted Multicolor finishes.

Monica variant
Add a photo to this gallery

In 2010, Fini gave away Fut Gogo's in Packs of Fini Teeth candy. They also had packs of 4 Unpainted Gogo's, and a Metallic Fut Gogo.  Fini starts distribution of the new collection of Gogo's Crazy Bones Turma Da Monica. The new gelatin candies won a format allusive to "Monica's Tooth." In purchasing an item from the new collection, the brand presents Fini Consumers with a collectible: a miniature of the characters of Monica. There are over 60 different options.

Fini Fut Gogo's Packs.
Add a photo to this gallery
Retrieved from "https://crazybonespedia.fandom.com/wiki/Food?oldid=94434"
Community content is available under CC-BY-SA unless otherwise noted.