Start a Wiki
Evolution is the second series of the modern Gogo's Crazy Bones franchise. This series includes all of the past characters from the previous series, but in a new evolved form. This is identified by their new looks, and half of them were available in translucency. All Gogo's in this series have the same moulds as the figures from Series 1, and are given new names which are partially based on their names from the past series.

In the sticker album, comics starring the Evolution Gogo's were featured as game rules, each showing the readers a more comedic approach to the games shown. 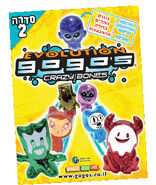 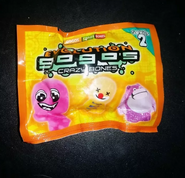 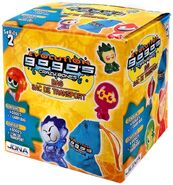 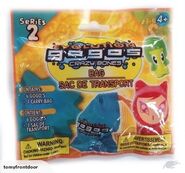 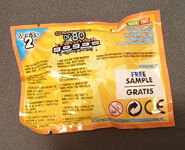 Mini Gogo's can be found inside the heads of Mega Metropolis and Fusion bones. They are smaller versions of those from the Evolution series, and they are slightly shorter than normal Gogo's.

Like Evolution, 40 characters were translucent while 40 were not. However, many Mini Gogo's had their looks swapped, such as Moshi having a solid appearance, whereas in the Evolution series she was available in a translucent look.

A size comparison between a Mini Gogo and an Evolution Gogo.
Add a photo to this gallery
Retrieved from "https://crazybonespedia.fandom.com/wiki/Evolution?oldid=102954"
Community content is available under CC-BY-SA unless otherwise noted.