Start a Wiki
In 2001, Magic Box Int. launched a series of Crazy Bones based on the smash-hit anime series, Dragonball Z. There are 40 characters to collect. Each pack contains three Gogo's, one sticker sheet and a game card.

The Dragonball Z 'Super Saiyan Collector's Kit' was a large metal lunchbox that was sold exclusively in Australia and had many Gogo's inside, as well a large poster of Trunks or Goku.

In Australia there was a chance of finding exclusive shiny gold (precious metal) figures. 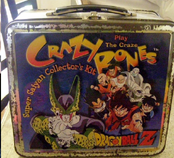 Lot of figures with Gold figure

Add a photo to this gallery
Retrieved from "https://crazybonespedia.fandom.com/wiki/Dragonball_Z?oldid=105184"
Community content is available under CC-BY-SA unless otherwise noted.