A Series released by PPI Worldwide in 2014. This Series has Disney characters from various movies. Other items include a tin, and dispenser. Prototypes were originally shown at the 2013 Las Vegas Licensing Expo. The series was released in Brazil in 2015.

It was released in The UK as Wikkeez in 2014. These were going to be Gogo's, but they are not called Gogo's for unknown reasons. The Reason probably being licensing issues. They also changed the back of them, so they wouldn't be confused with Gogo's. It includes characters from Disney movies/shows. There will be 50+ different characters in Series 1. There are also Special Edition Gold Characters in The Blind Bags.

In 2014, these were still released in Israel as Gogo's, with the same characters and designs from Disney Wikkeez. These were only given away as a promo when you bought Strauss Brand, Dany Chocolate Flavored Yogurt. With this promotion, kids could try to win various prizes, and win a family holiday to Disneyland Paris.

In 2015, they released characters from Series 1 and 2 in one series as Wikkeez instead for an unknown reason. The promotion is still with Strauss though.

In the same year, they released subsets of Disney Wikkeez, promotion with Strauss and Danone (instead of Dany). The subsets featured Disney Princesses from Series 1 and 2, and The Ultimate Spiderman, which features characters from Marvel Wikkeez, along with exclusive molds.

In October 2014, the Wikkeez were released in Germany and it included some new color variants of existing figures and two exclusive figures that aren't in the other countries releases (Boo (Disney) and Mickey Mouse). Also released in this promotion were board games and collector's boxes.

In Brazil, Panini released a series of Disney Gogos along with a sticker album. The mobile company Claro also did a promotion that you can get 1 Gogo per RS 20.00 in credits.

Regular back of a Disney Gogo from Brazil

Crater on the back of a Wikkeez figure

Unknown Female Character Pack
Add a photo to this gallery

Movie and TV Show Characters are from

In December 2014, a mega glitter Mickey Mouse figure was released. It was also part of the Rewe promotion.

Mickey Mouse (Mega)
A second series to the Disney Wikkeez was released in early 2015 in European countries. In Fall 2016, an updated version of this series was released in Brazil, under the Gogo's Crazy Bones Brand. The updated version includes more characters, including some from new movies, which are currently exclusive to Brazil. 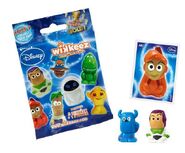 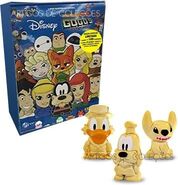 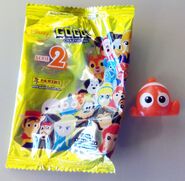 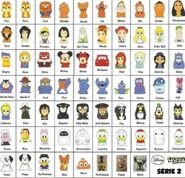 Disney Brazil Series 2 Checklist
Add a photo to this gallery
Retrieved from "https://crazybonespedia.fandom.com/wiki/Disney?oldid=94626"
Community content is available under CC-BY-SA unless otherwise noted.