Crazy Bones are small colorful characters that come in hundreds of colors and designs, each one with a unique name, design, personality and special ability.

Gogo's were inspired by games from ancient Greece where children played by bouncing and throwing the carved knuckle bones of sheep, called astralgus - the game was called Astragals . The game has survived for over 3.000 years, and is known today as "jacks"; marbles are another variation. Each Gogo has a unique number for collecting and designed so you can hold and throw with one finger.

They are distributed by Panini in Brazil, and Plus Marketing in Europe. Toy Craze was formerly the USA distributor. However, the Canadian-based company Jonic Distribution North America (www.jdna.ca) is currently the sole distributor in North America.

In March 2009, to mark the release of the Explorer series in the UK, the Daily Mirror newspaper ran a week-long promotion where they gave away free figurines, stickers and sticker books. Two of the figurines were exclusive to this giveaway.

In April 2009, the Entertainer toy shop in Kingston upon Thames held a 'swap day'. Every swapper received a special 'Laser Mosh'.

C1000, a supermarket in Holland, has given away exclusive Gogo's.

In April 2011, Walgreens gave away free sample to customers. 5,000 of these Gogo's were super-rare Miro-K characters.

In early 2012, Free Gogo's were included with Panasonic batteries in Germany. These Gogo's used the same sculpt as the Daily Mirror Gogo's.

Each pack of Gogo's comes with stickers. Albums are avalible for the stickers.

"More than 2000 years ago... NO it's not a mistake. More than 2000 years ago the boys and girls of the ancient Greek and Roman empires played a game using bones, throwing and bouncing them in village squares and in their own homes. We know this because some ancient paintings on marble were discovered in the city of Resina, which date back more than 2000 years, these paintings showed children playing this game. This ancient pastime known as "Tabas" has been kept alive throughout the years and now you are about to discover how much fun it can be. Here's your chance to trade, collect, play, and go crazy for Crazy Bones." - Crazy Bones handbook.

Knucklebones is the game that had inspired the Crazy Bones franchise. It is a game that originated in the ancient Greek and Roman empires, played with usually five small objects. Originally, the game used the "knucklebones" (actually the astragalus:a bone in the ankle, or hock[1]) of a sheep, which are thrown up and caught in various ways.

Now Knucklebones are known as Crazy Bones (or Gogos Crazy Bones), and are now sculpted into characters, and are made in various colors. There are two areas of Crazy Bones. The first one is the Crazy Bones series, also known as the classics. These Series were never painted, except for the Aliens series. These were sculpted into characters. This area lasted from 1996-2006. Then in 2007 and/or 2008, a new area started, these were called Gogos Crazy Bones, mostly known as Gogos. Most of these were sculpted like people, but some were different with a more humanoid form. The newer ones were all painted, except in some countries, they are not painted as much. 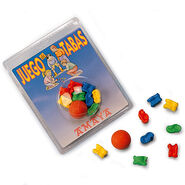 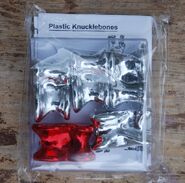 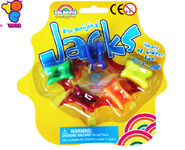 The second most common is the PPI stamp. This is used in countries outside Europe and North America. (Example being Brazil or Phillippines) It is used for Urban Toys, Megatrip, Foot, Cool, and Monica's Gang series. (Also used for Miro-K.) A different PPI Worldwide Stamp was used for the Alternate Series of Mega Gogo's Crazy Bones, Mega Megatrip, and Mega Turma Da Monica. They all say "2009, 2010, or 2011 PPI Worldwide Group" at the top, but The Mega Turma Da Monica Gogo's has the words, "Mauricio De Sousa Producoes & 2011 PPI Worldwide Group".

Licenced sets of figures will have the copyright symbol along with the company's name. For example, the Toy Story series has "Copyright Disney" above the stamp.

What is very strange is that the Urban Toys Series has The Panini Stamp, but the number is above the stamp, but in the Megatrip and Fut Series, the number is in the stamp. There is a different Panini Stamp used for the Urban Toys Gogos. It is different than the first stamp. It is very simallar to the Magic Box Stamp. It has the Panini Logo on the stamp and it says Made In China at the top.

The Coca Cola stamp is used on Hielocos, the name for Crazy Bones in Mexico. There was also a Bazooka logo for Rockers released by Bazooka Bubblegum.

The final Crazy Bones stamp is the Kelloggs stamp. It was used for the Hielocos Gigantes series. 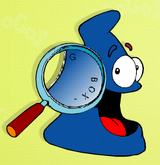 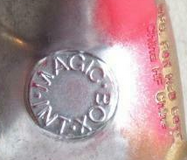 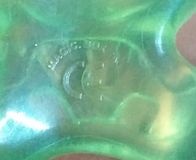 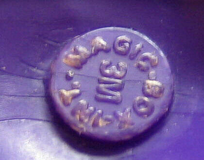 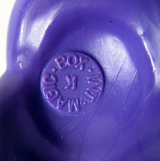 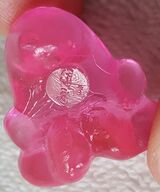 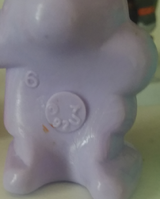 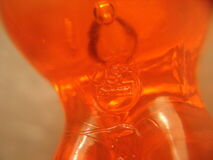 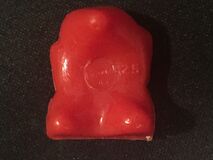 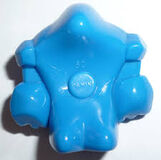 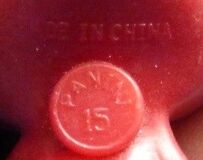 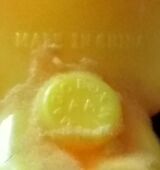 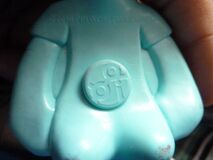 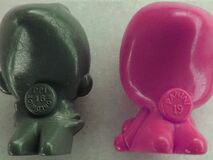 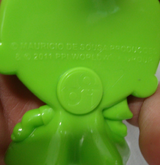 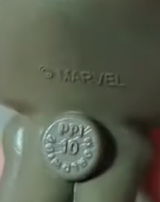 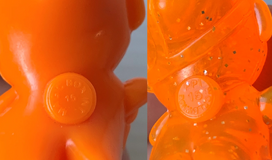 PPI and Magic Box Int stamp on the same figure, one for regular Megatrip, the other a special edition variant 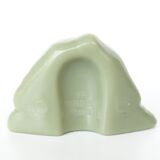 Wikkeez back
Add a photo to this gallery

Crazy Bones all have numbers. But they are organized in different ways.

Series 1 and 2 are released in Canada.

GoGo's is released in the US.

They are already a huge craze.

Bombers are released in Canada

Mega Bones are released, along with Sports and Ailens.

Sports Series 2 is released in Germany and Australia.

Shin Chan is released in Germany and Spain.

Medabots is released in Europe.

New Generation is released in the US.

Crazy Bones are sold in Five Below stores.

The Evolution series is released.

Magic Box takes a break from Gogo's and released Heroes.

1 Million Gogo's are given away at Walgreens stores.

A Trick Shot Competition is made.

Olympics is released in Israel.

This arbitrary scale may serve as a guideline when assigning degrees of rarity. It runs from 1, common, to 7, extremely rare, providing insight as to how readily availability may be to collectors.

1. Common – easy to find; average, widely available – 1 in 5 (or less) average chance of finding. The majority of figures in a set go under this category.

2. Infrequent – not as common – 1 in 25 (or less) average chance of finding. Figures such as Mosh and Powi fall under this category.

6. Rare – atypical; only thousands in existence – 1 in 5000 (or less) chance of finding. An example would be the classic metallic gold and silver bones.

7. Extremely rare – extraordinary, exceptional; only hundreds in existence – 1 in more than 5000 chance of finding.

This is just a quick list of the rarest Gogos from 2007 onward.

Black/White Diamond tins, each containing 10 gogos, that come in 5 colours. (So a total of 100). Rarity: Uncommon in the U.S. Very Rare outside of the U.S

Danone Dino Collection, with 10 exclusive dino gogos, and 20 gogos from the Edge series with the danone logo printed somewhere on their body or face. Rarity: Rare (Spain) Ultra Rare (Other areas aka U.S, U.k, etc)

Miro-K (Red) Extremely Rare (Only 5000 available, only released in the U.S)

Miro-K (Yellow) Very Rare (Released for a few months in the U.S. in a Target value pack)

Mr. Peako Extremely Rare (Only in the U.S, Only given away in contests, less made there Miro-K Red).

J-Box and Q-Mack Extremely Rare (Only given away in schools, U.S Exclusive)

Laser Mosh Extremely Rare (Only released in the U.K in a Toy store for one day in a swap event, you could swap a gogo for him).

Golden Tau, Golden Ayu, and Golden Suti. Extremely Rare (Less then a thousand of each were given away).

Series 1 MOST WANTED (5 gogos, Fist, Angiru, Ichiro, Hiraku, and B-boy) Ultra Rare (Rare but not to rare do to not being U.S exclusives.)

Secret Rares Series 1 (Purple Fist, Red Angiru, Purple B-boy, Red Ichiro, and Orange Hiraku) Unknown (Theres is no proof that secret rare gogos are actually rare but these colors so up the least on eBay).

Daily Mirror Exclusives (2 gogos, each come in both green and blue (total 4) Uncommon (U.K) Rare (U.S) (To many were made for the Daily Mirror promotion, this is why laser mosh is so rare, Magic box didn't want to much stock again)

Panasonic Series (2 gogos, each in 3 different colours (total 6) Ultra Rare (Were never made in the U.S)

If you are having trouble identifying a Gogo/Crazy Bone, then here is a list of places that may help you.
Retrieved from "https://crazybonespedia.fandom.com/wiki/Crazy_Bones?oldid=103818"
Community content is available under CC-BY-SA unless otherwise noted.