Released in 2011, Cool is a series of music-based Gogos. The standard release had 80 different characters.

The standard release refers to the Panini and PMI releases. This release had all 80 characters in their regular variants and naming.

While the Chilean Panini release went under a different name, it contains the same number of figures and variants as the standard release. (Read Groovy.)

In 2013, Albert released cool gogos in the Czech republic. They were 41 to collect in this series. 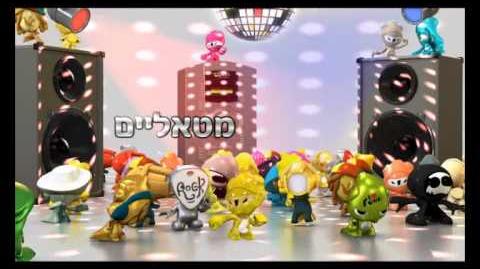 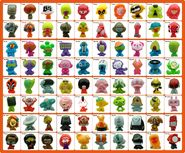 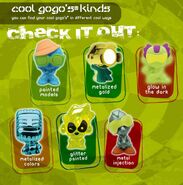 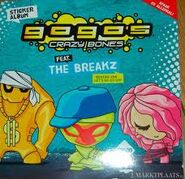 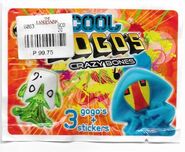 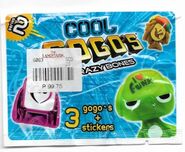 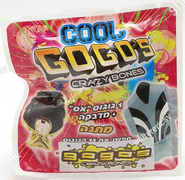 In the Netherlands and Chile, the Cool series was released under the name, "Groovy Gogo's Crazy Bones."

In the Netherlands, only 60 of the 80 characters were in this series. Many characters were redesigned and/or renamed. Tyl, for example, was given a new look, and renamed Bee. C1000 also released a C1000 Collector Case that contains all 60 of the Groovy Gogo's inside.

In Chile, a sweepstake was held for completing the album. If one could complete the album, a special coupon would be received. If this coupon was activated, the participant could be entered into a raffle to win a red Nintendo Wii, an IPad, and/or PS3 console. This was promoted on the back cover of Groovy albums.

The Groovy series was released in Indonesia by distributor EMCO Toys sometime in the 2010's.

A song heavily promoted this series called "Let's Go," by a fictional band, known as "The Breakz." The Breakz consisted of characters, Tez, Bling, Zipp, Flow, Silo, and Bee as band members. 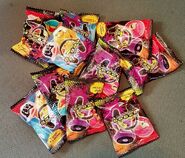 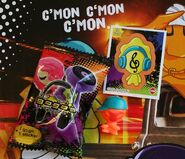 Package with a sticker 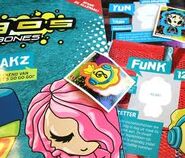 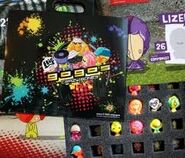 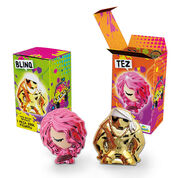 The Breakz band members
Add a photo to this gallery

A tin released including 10 Metallic Gogo's in various colors. The tin first saw a release in the Philippines but was reissued in Indonesia.

Add a photo to this gallery
In 2011 two special mega version of Cool/Groovy GoGo's  were sold in C1000 stores in the Nederlands. They were Mega Versions of Bling and Tez.

Set of figures released in promotion with Neviot in Israel. The figures came with specially marked "TOGO 500" six packs of waters.

Neviot Promo
Add a photo to this gallery

Set of Glow in the Dark figures from the Cool Series. Released in Summer of 2011 in Israel in promotion with Nestle. This set consists of 20 figures, specifically #21-#40.

Charging up! (from the Grannelle collection)

Set of figures released in promotion with Shufersal supermarkets in Israel.

Shufersal Promotional Signage
Add a photo to this gallery

In Costa Rica, Cool Gogo's were released in promotion with diary brand, Dos Pinos. Included as a promo toy with Lula Yogurt, the set comprised of the first 40 figures. According to Costa Rican collector, Fisgon89, there were no commercials created for the promotion. The only known advertisements are from posts on Dos Pinos Facebook. This has made the series almost unknown to the public. 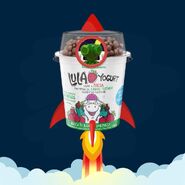 Add a photo to this gallery
Retrieved from "https://crazybonespedia.fandom.com/wiki/Cool?oldid=104793"
Community content is available under CC-BY-SA unless otherwise noted.