Start a Wiki
Crazy Bones come in Many different colors, here is a guide of all the color types they can come in.

This page will show which colors individual modern Gogo's will come in.

Your typical Crazy Bone character. They come in every color of the rainbow! Nothing too special about these ones, just plain simple colors. The official sticker guides stated that the colors of brown, black and white would get retired around 1998 which meant they were harder to find, but there was very little truth to this as they would continue to produce figurines in this color.

Even though this page states 'every color of the rainbow', other solid colors count too

The over seas Urban Toys figures were from Series 1, but were unpainted

Known as multicolor, these special unique bones have a hand painted touch to them. These are NOT available in the older series of Crazy Bones, with the exception of Aliens. All new series except for Genios have painted figures.

Some Aliens have painted faces (some glow in the dark eyes), which makes it the only classic series to be this detailed

Some of the Monica's Gang figures have painted faces

Disney Gogo's with painted faces
Add a photo to this gallery

These are slightly transparent colorful Crazy Bones that look like Jell-o. They do not count as Ice Bones, since they aren't completely transparent, nor are the sparkles. These are semi-translucent Bones with bright neon colors.

These are Crazy Bones that are clear and completely transparent and almost look like cubes of ice. There is also crystal ice bones which come in different colors and are similar to Jellies but are much more transparent.

These are Crazy Bones that are transparent and are filled with sparkly glitter pieces. The color of the glitter inside varies but it is usually either gold or silver and more uncommonly green, red, purple and blue.

Mickey tin with Sparkles Gogo's inside 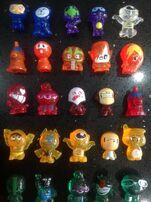 These Crazy Bones have swirls of semi-translucent colors mixed with pearly white streaks to make for a color scheme resembling toothpaste. 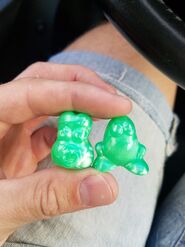 Orange Genios
Add a photo to this gallery

A rare pack of exclusive Glowie Gogo's from the classic series

A rare pack of exclusive Glowie Gogo's from the Things series

Original Gogo's and their glow effect in action

Some Aliens have glow in the dark eyes

These Olympic Glowies, from Israel, were included in boxes of frozen waffles! (from the Grannelle collection)

Mega Bones glowies
Add a photo to this gallery
These are alot like Precious Metals (colors) but with a different color shine to them such as Pink and Blue.

A very rare Supergoal Gogo that has a shiny finish

Shiny Megatrip tin from Asia
Add a photo to this gallery

These Crazy Bones are characterized by having metallic colors and are covered in small lines that give the appearance of cracks. 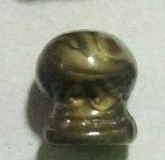 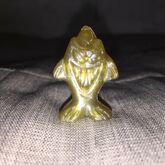 Metal Sharkey
Add a photo to this gallery
These Precious Metal Crazy Bones are coated in a shiny gold or silver paint and are very shiny and reflective in appearance. Some Precious Metals can be acquired in collector's tins and aren't valued as high.

For shiny blue, pink and other colors aside from Silver and Gold see Shiny (colors).

Precious Metals Can Be Found In These Series:

In the late 90's and early 2000's you could win a certificate that would allow you to collect a Silver figure from the original Gogos (1996).

There was a promotion by C1000, where if you manage to find a Gold Suti, you win a limousine ride, and get over 2,000 packs of Gogo's for your school. It is one of the rarest Crazy Bones, since there was only ever 425 of them made. A golden Ayu was given away in a similar deal by Real stores, along with a golden Tau distributed by Carrefour stores.

A purple Smiley with gold spray paint chipping off of it

Gogo's that change color in the sun or in cold or warm water. They are only available in the Megatrip, Foot, Turma Da Monica, and Gogo's Futebol series. Furthermore, elusive Energy variants of Megatrip characters only exist in the Ecuador release. 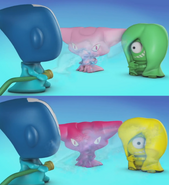 Megatrip Energy Gogo's in the Mi Ferrisariato Commercial.
Add a photo to this gallery
Tie-dye figures are a mix of two different colors, they are very rare to find and are not documented on any official guide. 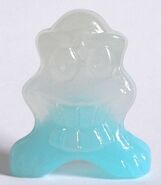 Tie-dye Wizard and The Eternal Dragon (credit: Sarethums and Firewalker_75) 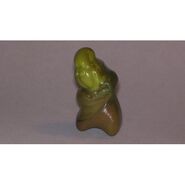 This fuzzy color / texture is only found in the Superstars series, whereas the Gogo's obtain a fuzzy texture onto them. This texture would either cover the whole Gogo, or cover nearly all of it. They are only found in the Superstars series, wrapped up in plastic bags to prevent scratches. Some Fuzzy's had Precious metal painting on them, for example Hiroki, (see image at top). Also this leads to Gogo's getting dust on them so make sure to keep them stored safely. Each Gogo comes only in two colors which is a lot less than the five colors of previous series.

In Series 1, there were two sets of rarities, the 10 Wanteds and the 5 Most Wanteds, as well as the classic Miro-K. In Series 2, the only rarity was Mr. Peako - while the translucent "glitter" figures proved to be popular, they were just as readily accessible as any others. Series 4 showed a return of Wanted hard-to-find's, sometimes referred to as Most Wanteds - 10 characters were given the nod.

However, it was Series 3 (Explorer) that proved to have the most ambitious rarity campaign so far - each character was cast in a laser finish; a total of 80 limited editions. A small amount of characters were also produced in a lazer finish in the 2010 England series. In 2012, PPI reintroduced the variant in its Filipino Megatrip release. A extremely small amount of Mosh, the first character in the first modern series, were made into a lazer color and given away at Explorer launch events in the U.K. along with regular explorer figures being given away/traded. "Swap Bags" and "Swap Box's" may have been used for this event. They have been seen in gogo's listings from the U.K. although they have not been confirmed to have been used for this event.

The lasers only have 4 basic colors (aside from highlights): yellow, blue, orange, and green. Amassing a complete set can be a daunting task, since they were included once in 35 issues (estimated - see accompanying photo).

This author invested a great deal in bringing the pictured collection together, and in the end, was forced to purchase the final 35 pieces - even so, #20, Offon, continues to be elusive at the time of this writing. Many consider this to be an unfair move - cheating as it were - since the purist considers the only fair way of collecting is through luck-of-the-draw, or trades with other collectors. Yet the monetary expenditure reached several hundred dollars, spread over months, in typical pack purchases only half-way through the effort. Even those final 35 ultimately cost almost $200.00 USD (including overseas shipping charges), resulting in an astronomical outlay. For these reasons, the collection seen here, even though still incomplete, represents the largest capital endowment in the entire Grannelle collection.

The problem of encountering duplicates was frustrating (from the Grannelle collection) 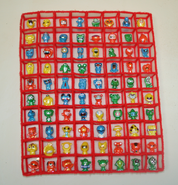 All of the Series 3 laser figures (from the Grannelle collection).

Figures that have a small hole on the plastic that you can blow into and whistle a tune. These figures just have very minor factory faults which causes a hole in their plastic and because of this they were categorized as whistlers in the old Crazy Bones guide books.

Special forms of solid neon colors that glow under a UV light. They appear in Buddies and Mutants packs.

Gooies are extremely deformed Crazy Bones. These are very hard to get, and are avalible in every series from GoGo's to New Generation. Gooies are rare because they are actually a factory fault making the figure mutated and not made this way intentionally.

Gooies are extremely rare in the new series of Crazy Bones since they are all hand painted and go through many quality inspections before they are finally sold, but in the 90's this wasn't the case and figures would be rushed out to stores. Gooies in the new series can just be a matter of being painted on the wrong part of the figure, or forgotten to be painted atall when they were meant to be.

Although it's an unusual occurance to find one of these in a pack, this doesn't make them more valuble than others, unless there is collector's of oddities.

Unknown Gooey (too mutated to identify!)

Unknown Gooey (too mutated to identify!)

Two different Gooies of 'Vampire' in the same color!

A group of Gogo's gooies

Color defects can be slightly changed from the original or are drastically different from the original product. Not much is known about color defects. Some have paint on them and some don't. This may be because the color errors were seen early enough to not get painted. None have been found in packs and usually get thrown out at the factory. Some have survived and were found in Spain. This only happens to the new generation of Gogo's. Also note that B-Boy MW dosent have his body symbol painted, just like the sticker image of B-Boy MW, so these figures were produced most likely a few months before the figures finalized colors and paint features were deicded on.

There is very rare chances that in the modern series there will be an error in the factory where another Gogo's face has been printed on a different Gogo. Or in other cases, there is no face printed on them at all. Even though it is a very rare chance that this mistake occurs, it doesn't value the Gogo higher, unless there is collector's of oddities out there.

Add a photo to this gallery
Retrieved from "https://crazybonespedia.fandom.com/wiki/Color_Guide?oldid=106024"
Community content is available under CC-BY-SA unless otherwise noted.