Start a Wiki
The Buddies series was released in 1998 and featured 58 friendly looking characters. Each foil pack contains one sticker sheet, a game card and four figurines.

Sticker album (US)
Add a photo to this gallery

In the United Kingdom, Australia and most of Europe, Buddies and Mutants were merged into one set known simply as 'Crazy Bones' or 'Gogo's Crazy Bones' and Sharkey was boasted on the front of the packs as being a rarity that is worth tracking down. This series also had a commercial on television. In Australia there were exclusive rare shiny gold Crazy Bones in this series to obtain, which was the only country that had them in that color variant. In Italy, the series was merged with New Generation.

The packages were orange in their original 1998 release and in their 2000 re-release they were given yellow packages.

The "Have you found Sharkey?" slogan from the UK which caused the character to be a rarity 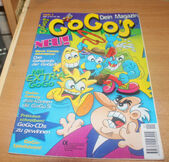 A comic book from Germany that features Buddies and Mutants characters

Add a photo to this gallery
Retrieved from "https://crazybonespedia.fandom.com/wiki/Buddies?oldid=100962"
Community content is available under CC-BY-SA unless otherwise noted.