Power Bombers are larger versions of 16 of the original Gogos characters. These have a large, bloated feel to them and are best when used for K.O/Bomber game. These were also given away with promotional bags of KP Skips potato chips.

The Fly (Bomber) aka King Prawny

A selection of bones from this series.

Alternate names on the Skips box

Box with a group of figures

Canadian sticker book where this series is described as 'JoJo's Power Bombers'.
Add a photo to this gallery

Ultimately, these bones are some of the rarer figures. They turn up occasionally in eBay auctions, usually in small amounts. This picture beside, taken from a very large collection, gives some impression of the rarity of certain figures over others, the availability of colors, etc. Spaces are left for figures that are absent from the collection. Bones in this series came in any of 14 colors: A complete version of the display to the left would be an 100% complete set.  Colors are (from left to right):Red, Pink, Yellow, Blue, Clear, Green, Orange, Purple, Violet, Glow-in-the dark, Clear dark Blue, Clear glittery Gold, Clear glittery Blue, and a darker, matt-finished Red. Using the display, it's rather clear that the dark, matt Red is one of the rarest colors, and that as the figures number less and less (Cool Dude being #1, Monster being #16) they become more uncommon. This only applies to the Canadian and North American release of the figures, as in other parts of the world they could come in many more colors.

Skinny Bombers, also known as Power Bombers, were larger Crazy Bones. There are 14 characters in the European version and 8 in the Portugal and USA version. The characters are supposed to be some of the Gogos (Original) who've grown up into adults.

In the United Kingdom, two figures could be purchased inside a plastic coffin and they were named Mega Crazy Bones.

"Crazy Bones Mega Bone Skinny Bombers! 14 characters based on some of the Original GoGo's Crazy Bones - but these guys have grown up! They are bigger than regular Crazy Bones, but with a flatter "skinny" look. Why do we call them bombers? When you use these new Mega Bones Bombers to play Airbone - they usually win!" 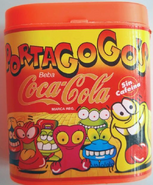 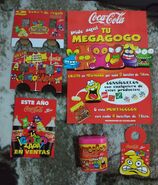 Backside of one of the checklists. (1-6)

Backside of one of the checklists. (1-14)
Add a photo to this gallery
Retrieved from "https://crazybonespedia.fandom.com/wiki/Bombers?oldid=104302"
Community content is available under CC-BY-SA unless otherwise noted.