B-Boy is the 45th Gogo in Series 1, and he is known as Borgo in Urban Toys.

B-Boy appears to look like a pig with an "X" on it's chest and a snout. He has a similar appearance to the charter ninji from the series Super Mario Bros. An image can be seen at the bottom of this page

Eats a lot of popcorn to improve bouncing power.

A Most Wanted version of B-Boy from Series 1. He is one of the 5 Most Wanted gogos released in Series 1. Gold versions of these gogos were released in the Urban Toys series. Miscolourings in some figures can cause B-Boy to have either red or orange limes.

It's "Most Wanted" variant seems to look like a wrestler.

There is a different colored B-boy in blue instead of purple. This is most likely a defect. There's also a color error Tremi and Skull. 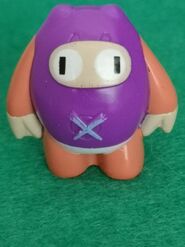 Retrieved from "https://crazybonespedia.fandom.com/wiki/B-Boy?oldid=89739"
Community content is available under CC-BY-SA unless otherwise noted.