Angiru has two grey buttons for his eyes, as well as a wide smile. He also has a yellow 'a' symbol for his stomach. For his "Most Wanted" appearance, he seems to have a circular design around him, consisting of red, yellow and green colours. He also appears to have white eyes rather than grey.

Angiru is shown to be quite secretive (shown in Issue 2 where he refuses to tell Jelly about Neko's favourite game). It is also implied that he believes in the supernatural as shown in Issue 1. He is shown to be friends with Umu and Mosh, with the latter introducing the Mega Gogos to the other Gogos alongside him. In many different issues, Angiru would sometimes appear in his Most Wanted form with no exclaimation given.

Tell Angiru your secrets and they will be safe forever.

His bionic eyes allow him to recognise any danger at high distances, and with this power, it's easy to get ready to any battle. 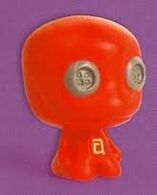 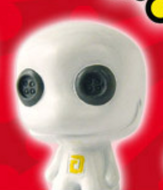 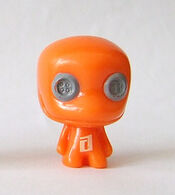 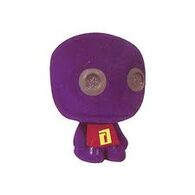 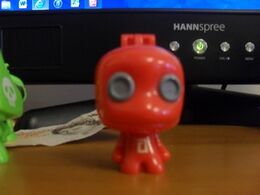 Plush Angiru
Add a photo to this gallery
Retrieved from "https://crazybonespedia.fandom.com/wiki/Angiru?oldid=107441"
Community content is available under CC-BY-SA unless otherwise noted.