Everything in this page was Gogo's related items that were used in promotional material and advertisements, but cannot actually be purchased.

A suit designed to look like Mosh. This suit was worn for the Gogo's Crazy Bones commercials and other promos. It is not released for the public to buy. Also in 2009 to celebrate the release of the Groovy series in Netherlands, there was a band known as The Breakz that appeared on publicity stunts on television, as well as music videos and advertisements and they were wore masks of six different Gogo's.

There was also a suit of Eggy and Crazy Clyde that was used to promote the Canadian release of Gogo's, as well as the Toronto Blue Jays sporting event. 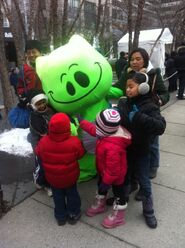 The Breakz band members
Add a photo to this gallery

These were decorations put outside of C1000 stores for their Gogo's Crazy Bones promotions. As a result, they weren't for sale. There are only three: Stein, Jarum and Karin.

Add a photo to this gallery
Retrieved from "https://crazybonespedia.fandom.com/wiki/Advertising_Products?oldid=84045"
Community content is available under CC-BY-SA unless otherwise noted.